Now, What About Political Cartoons?

In this early part of 2017, there is tremendous political turmoil. Trump is President, and let’s say that both parties can agree that he has made some serious mistakes. The country is divided, in conflict within itself, and there has been a huge ruckus about the repeal of Obamacare- which was just defeated.

But here’s the controversy. My “mentor” as a newbie some years back was a book I read by the wonderful cartoonist Randy Glasenbergen, called “How To Be a Successful Cartoonist”. In this book Randy notes that one should never make a cartoon that is offensive to anyone. I liked that advice and have always followed it. Thus I have always avoided doing political cartoons.

An additional factor is that my family, friends, and in-laws are all over the map. Some are Christian, Mormon, Buddhist, Republican, Libertarian, Democrat, Independent, conservative, liberal. I cherish them all. How does one manage to not offend anyone?

Recently my editor at the Funny Times challenged me to make a cartoon about Trump. That opened up a new door. But I developed cartoonist’s block over that one, and weeks went by with no ideas. Perhaps it is because the current political situation, in my opinion, is just not funny. Creepy, yes. Scary, yes.

But then I had a flash of inspiration, and here it is in the below cartoon. Just take your Most Hated Politician (admit it, we all have one) and plug them right into this cartoon. And there you have it! Problem solved, and I got to make a political point in there as well (subtle, but there nonetheless). 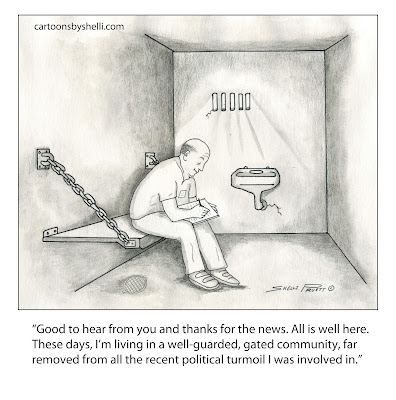 As an aside, the Funny Times is a great cartoon mag. It comes out once a month in hard copy. It does not carry ads so is not beholden to any corporations or companies that would crimp their style or limit their humor. And they feature lots of different artists, styles, and types of humor not seen elsewhere. I highly recommend it.

Here’s a link to their site:  http://funnytimes.com/

I’ll also post a link to Randy Glasenbergen’s book “How To Be a Successful Cartoonist”. It is out of print and somewhat out of date as digital work, the internet and email submissions have now taken over.

But his advice on starting out in cartooning is true and timeless. His writing is encouraging, positive, and covers all the important points. The book also has lots of funny cartoons. Randy was one who was able to actually make a living doing cartoons (very rare these days) and he did it by making cartoons prolifically and supplying very creative humor that resonates with just about anyone. One can still get a copy on Amazon:

If my political cartoon is well-received and gives no backlash, I may do another one soon. Stay tuned!

Feel free to visit my website, www.cartoonsbyshelli.com , for a relaxing time enjoying some unusual cartoons with a messsage. Best enjoyed with a glass of wine or herbal tea, take your pick.

shelli
I'm a person of all trades and this blog reflects my diverse interests. One section is my world of cartoons. I have been doing cartoons since I could pick up a pencil. I think that cartoons show another view of the world, perhaps an alternate universe. My cartoons have been published in numerous magazines/journals/websites including the Wall Street Journal. Feel free to contact me if you would like to use any of these cartoons, or to discuss them. My work can also be seen at my website www.QLCartoons.com, or on the page "Quantum Leap Cartoons" on Facebook. I also manage and write for "Shelli's Shopping" which is a blog about good values online and in the real world for those who want good quality and value in their purchases. I get a little buzz when I find a good bargain, and others who do will enjoy these tidbits. Hope you enjoy both these blogs and comments and feedback are always welcome.