Cartoons and a Sense of Identity- Who Are We, These Days?

This may be a strange topic for a cartoonist’s blog, but, hey, cartoonists - possibly more than others - can cover just about any topic you can think of. As long as we are funny while doing so.

My latest commentary (or rant?) is about the intricate bonding of a person’s identity to their online persona and connection to today’s technology communication channels.

There are many statistics and demographic studies these days that point up how much time, energy, and attention is spent by the average person online- browsing, social media, Twitter, Instagram, on and on.

The question that comes to mind is, if all of this were to suddenly disappear, where would the average person be? WHO would they be?

I actually had a small-world version of this happen today. Over the last few weeks, my Google Chrome (which I use for my Windows 10) began to stall and crash. Then, suddenly, that alarming alert window appears out of nowhere. “You have a Zeus virus- Microsoft is down! Call this number right away or all of your data will be lost!” Computer now frozen.

I called Tech Support at Time-Warner (oops, Spectrum these days) and was advised that this is a scam, and not to call the number. I was told to take the computer immediately to Best Buy to the Geek Squad, as it was infected with ransom-ware. That’s where you call the number on the alert, the guy pretends to be Microsoft, and guides you to unwittingly give them access to your computer. Then you have to pay $500 to get control of your computer back!

Luckily I was aware of this and it all turned out well, as I never called the number. Unlike what the agent predicted, I did not in fact have to re-install Windows and erase all the content of my computer. The guy at Best Buy showed me a simple way to exit off the alert, no big changes needed.

But during those hours of queasy dread as I hauled off to Best Buy, I had an existential crisis of sorts. I realized that my computer had become my lifeline and there was literally almost no action I could take in life without my computer.

Suddenly I was forced to face the prospect of losing all that data and starting over, and not having computer access for at least a day. Yeah, yeah, I run a backup every month on my computer. But who knows how to take the backup drive and re-load everything again? Not me, that’s for sure. That would lead to another exhausting bout of anxiety, more calls to Tech Support and more. And more days offline. What crucial posts and communications would I be missing during this time? I'm having a panic attack after being offline for even an hour.

A friend of mine refers to the online community as a “hive-mind” and he may be right. For me, the prospect of being disconnected even for a short time from "the hive" was, I confess, horrifying.

But underneath all this is a more philosophical point. Where have our identities gone? Are they really merged with our online persona? Are our physical lives in the real world becoming just a sideline activity? If I were to lose all my files, docs, and art, what would be left of me? Would anyone know I was here? Would I know I was here?

After this crisis, one thing I can say is that I have taken all my cartoon art and backed it up on a good, old-fashioned large-volume thumb drive. So if it all goes down, I have the one thing left and right to hand that is really precious to me - my cartoons.

Cartooning gives one a sense of identity. It may not be something in the physical world like singing, or throwing a clay pot. But each cartoonist has their own unique style and their own voice. So far, every cartoonist I have met told me they started cartooning at a very early age (5 years and up) and never stopped. There’s got to be a reason. For a cartoonist, each cartoon is an expression of themselves and the essence of their being.

Not to get all lofty, as cartooning is also just plain fun. So that’s all for now. I’m off to start my next cartoons- which are on physical universe paper with ink and water colors. After all this, I need something I can touch.

Here’s a cartoon I made to put all this fuzzy thought into picture form. 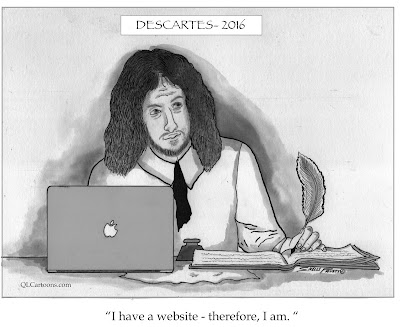 shelli
I'm a person of all trades and this blog reflects my diverse interests. One section is my world of cartoons. I have been doing cartoons since I could pick up a pencil. I think that cartoons show another view of the world, perhaps an alternate universe. My cartoons have been published in numerous magazines/journals/websites including the Wall Street Journal. Feel free to contact me if you would like to use any of these cartoons, or to discuss them. My work can also be seen at my website www.QLCartoons.com, or on the page "Quantum Leap Cartoons" on Facebook. I also manage and write for "Shelli's Shopping" which is a blog about good values online and in the real world for those who want good quality and value in their purchases. I get a little buzz when I find a good bargain, and others who do will enjoy these tidbits. Hope you enjoy both these blogs and comments and feedback are always welcome.